He has gone from an overweight couch potato to Ironman in less than four years.  In the summer of 2014 Harding completed his third 140.6 Ironman in Mont Tremblant, Quebec. He is currently in training to compete in a full Ironman with an individual with a disability. 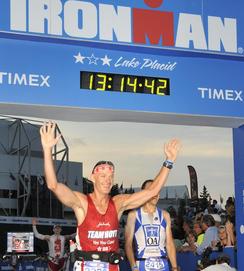 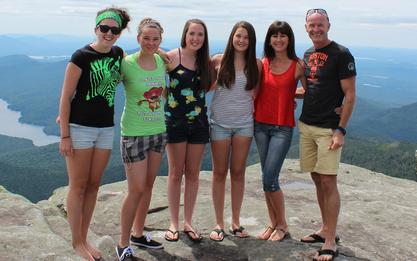 Wes is also a motivational speaker, encouraging people to live out their dreams because "anything is possible"!  Wes is a member of the Team Hoyt Boston Marathon Team (2012-2017).

Wes Harding currently resides in Sarnia, Ontario, Canada with his wife, Sue and four daughters.  He is a 1990 graduate of McMaster University with a degree in Religious Studies and a 2011 graduate of Windsor University with a degree in  Education. Wes has recently received his Specialists Certification in Special Education and Guidance and Counselling from the University of Windsor and has recently become an IRONMAN Certified Coach as set out by the World Triathlon Corporation.  He is an educator and is a member of the Ontario College of Teachers.
In the spring of 2015 Wes started up Team Hoyt Canada (Team Hoyts mission is to raise awareness of inclusion, educate, inspire and enrich the lives of individuals, families and communities by pairing athletes of differing abilities in endurance events to promote the Team Hoyt motto, "Yes, You Can!") which he currently serves as President.  Motivated by Rick and Dick Hoyt, better known as Team Hoyt, Harding strives to bring inclusion into the sports world of running and triathlons.
View on Mobile